Watching a video on the internet? Chances are you found it on YouTube. The website first arrived on the internet scene back in 2005. Since then it has grown to become one of the leading websites in existence, offering huge advertising potential.

YouTube is beyond big. 400 hours of content is uploaded to YouTube every minute. One billion hours of content are watched every day. And it’s in the top five most popular websites on the internet. The YouTube video for Gangnam Style was the site’s first to reach 1 billion views. That took five months back in 2012. Fast forward to 2017 and Justin Bieber’s, Despacito, reached 1 billion views in just 97 days. Whichever way you look at it, YouTube is huge.

Television viewing figures across Europe are in decline. Children and young adults now watch a third less broadcast television than they did in 2010, preferring instead to watch online. Across all age ranges, the number of people watching linear television falls year on year. 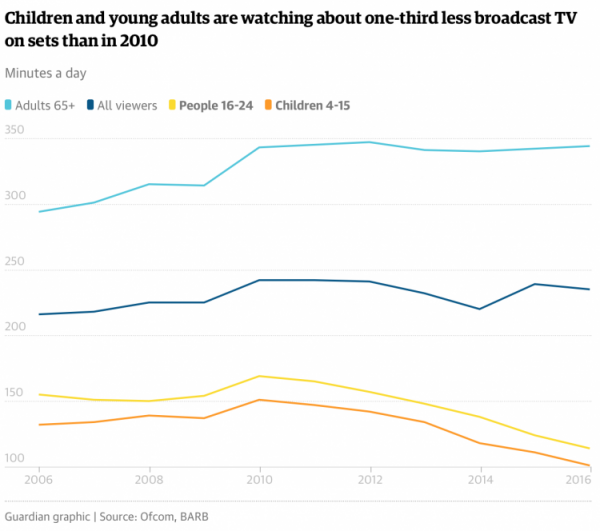 But the television networks aren’t about to take this lying down. The best and most forward-thinking players have developed means to compete with YouTube. Viewers can watch their favourite shows on demand. They can access programmes through handy apps on their smartphone.

So why is television falling out of favour? And what makes YouTube so incredibly popular? It comes down to three core factors.

On YouTube, viewers get a vast directory of videos to choose from. It’s basically a television network where they can dictate the schedule. They can discover niche shows that would never get aired on standard television channels. And they find something new to watch every day of the week. Sure, shows like Game of Thrones and other paid series are off limits. But YouTube viewers instead have access to a never-ending database of published and user-generated content.

Television is old hat. Networks have tried to integrate their programming into apps. But they haven’t always been quick enough or user friendly enough to keep ahead of the crowd. Younger audiences expect an exceptional internet experience. They won’t hang around for a glitchy app to load. Especially since they’ve had YouTube in their back pockets for the past decade.

YouTube has long been an integral part of the internet landscape. As a result, millennials and teenagers see it as part of their everyday social experience. They watch videos, share videos and engage with content in a way they could never do when watching television.

Younger generations don’t have the same tolerance for commercials as their older counterparts. They don’t want advertising to dominate their viewing experience in the way that it does when watching television. YouTube has adverts. It’s how the site has become worth an estimated $75 billion. But, YouTube commercial breaks are much shorter than those on TV. Often, they can be skipped after 5 seconds.

What’s more, there’s a newer and more effective form of advertising available to marketers through YouTube. Influencer marketing promotions are now commonplace. These are advertising messages incorporated into the videos being watched. When delivered by their favourite YouTube star, promotions come across as informative rather than intrusive, meaning viewers are much more likely to be engaged rather than annoyed by the experience. Join matches brands to relevant vloggers and helps you to fully carry out a campaign. Interested in what our software can do for you? Don’t hesitate and request a demo now.

YouTube continues to maintain a vast presence of the social media scene. Television networks will do their best to win back viewers. With better technology, more flexible viewing and a new approach to advertising, they will succeed to a certain extent. But the power of YouTube is not to be ignored or underestimated. Any marketer worth their salt will already be harnessing the incredible potential of YouTube and its army influencers to engage viewers and drive sales.